It’s time to share what I have been up to lately.

You know the title of my blog post today is what every person says at the beginning of the year. We all have a vision for the new year and many people make resolutions that by the 15th of the month are a thing of the past. Well I am not like every one else so I am declaring my new year, new me mantra today! Well not really, I actually began the year with this idea in mind and it has already been a long 15 days. I started the year with a 21 day Daniel Fast that I am in the midst of now as this will be my 3rd week starting today. I have been vlogging over on YouTube as I feel like this is going to be the year that I am going to push through my insecurities and finally get myself to a place of consistently eating healthy and exercising. The idea is to start the year off by consecrating myself to the Lord with the Daniel Fast and then continue to allow the Lord to guide me in my food choices and my exercise routine. I invite you to come over to YouTube and follow my journey.

I have been away for a week as I needed to step away from the distractions of the online world. I have been so tired and just barely able to keep up with my necessary daily functions. I found out today that my vitamin D level is very low so that’s why I have been so fatigued.

I am so thankful to have an answer!

I was also pleased to learn that my A1C is the lowest it has been since I was diagnosed with diabetes. In March it was 9.4 and now it is 6.6. I know it will get much better when I am able to get back on my health journey again. My food and water intake has been good but I need exercise in my life again.

It will happen! I am confident because I am inspired by my progress. Now I just pray Lord heal me by raising my vitamin D levels so I can stop taking naps every few hours. In Jesus Name, Amen!

Well today I decided to take a challenge from a Pastor that I follow on Periscope. On Saturday he challenged his followers to get a Word from the Lord and do a Periscope Broadcast. For those of you who don’t know, Periscope is an app where you can do live broadcasts and people can watch live and type in a chat box to talk to you and tap on their screens to give you hearts which is like clicking the like button on Facebook. The hearts actually help your visibility and they are accumulated and then the more hearts you have the higher your profile is in the ranking.

Anyway, I was going to do the broadcast yesterday but I didn’t get to it. So today at 5:51pm I get a notification from my Bible app on my phone after I got the verse of the day notification. In my mind, this was God’s way of giving me a Word for the Periscope. I read the verses Jude 1:20-21 and jotted down some notes and thought out what I was going to say. I prepared myself by putting the picture you see to left of my notification on my computer so I could show it in the broadcast and then I could not get the broadcast to work. I had to open and close the app a few times and finally it gave me the option to start a broadcast. I named it (Pastor’s Name) Challenge Accepted. Stepping out of my comfort zone.

Would you believe, that Pastor was the only person who clicked into my broadcast!! I froze up, forgot everything I was going to say and laughed while saying hi to the Pastor. I continued to talk to about 5 minutes and then I just shut it off because I knew that I was just blabbering at that point and there was no viewers on anyway at that point. I watched the replay and cracked up laughing so hard that I am sure I burned 300 calories if not more!

I will certainly have to work on my broadcasting skills for the future but today I’m chalking it up to a Periscope fail. Thankful for the challenge, thankful for the experience and thankful for the laughter. Now maybe tomorrow I will try this again. Maybe. Big maybe. 🙂 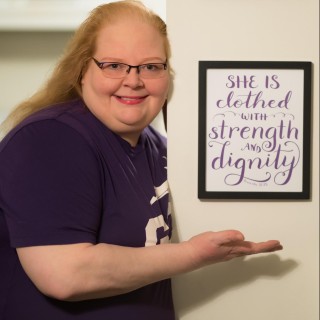 My mission is to encourage and empower women through sound Biblical teaching, prayer, and practical resources and by offering books, courses, mentoring, and referrals.